Module 1: What is Sociolinguistics?

The video below comes from an evolutionary biologist, Mark Pagel, and it is, admittedly, not exactly in concert with our hashqafah (worldview). It does, however, present some interesting thoughts (and maybe even some true thoughts) on language/linguistics. Where there is truth to be found in his words, we can recognize that all truth is Hashem's truth, wherever it is to be found. Critical thinking is a benchmark of higher education, and in entertaining ideas which are counter to our own, we sharpen our own presentations of the facts as we find them to be true. Rest assured, alternative ideas and varied approaches to the topic of language and linguistics will be found in the material to follow. Pagel's piece is presented as an example of the "worldly" science on the subject, against which a case is to be made from a more Biblical perspective.

What is Sociolinguistics?
A Brief Introduction
Prof. Brian Tice, M.Sci.

"Speech is civilization itself." (Thomas Mann)

"Language is by its very nature a communal thing; that is, it expresses never the exact thing but a compromise - that which is common to you, me, and everybody." (T. E. Hulme)

The Sapir-Whorf Hypothesis (1956) served as the groundbreaking for the field of Sociolinguistics as we know and understand it today. Edward Sapir and Benjamin Lee Whorf, both of England, were the architects of this science. They argued that language categories and usage influence not only the way the speaker thinks but also certain kinds of behaviors. [2] Sapir reasoned,

"The fact of the matter is that the 'real world' is to a large extent unconsciously built up on the language habits of the group. No two languages are ever sufficiently similar enough to be considered as representing the same social reality. The worlds in which different societies live are distinct worlds, not merely the same world with different labels attached." [3] 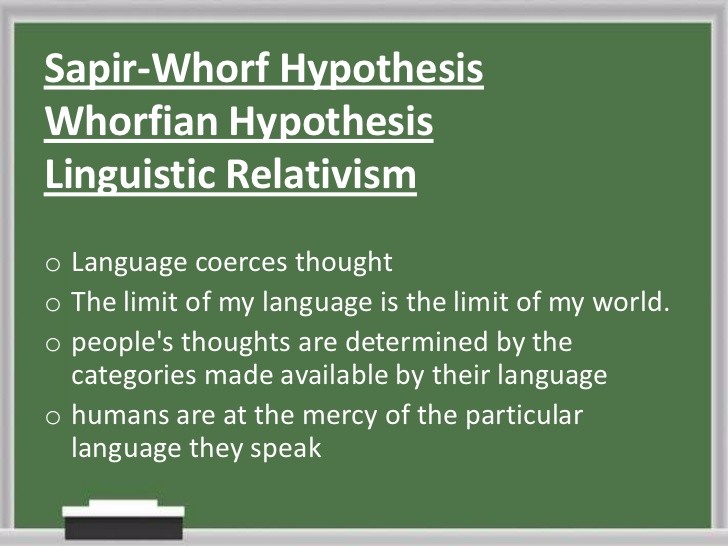 An example of the hypothesis at work is the recognition that the German language's short, choppy sound quality might contribute to the speakers of that language being more vulnerable to falling prey to the designs of a dictatorial personality. Another observation is that English is the only language on earth where the 1st person singular pronoun (I) is always capitalized - no matter where it occurs in a sentence - and shaped like a pedestal (note that German and Spanish capitalize the 2nd person plural pronoun regardless of position), and its speakers tend to elevate the self more than most other cultures do. The positive side of that is that English-speaking cultures emphasize personal responsibility for actions. In contrast, Russian never capitalizes any pronoun outside of the first position of a sentence, and the letter representing the first person pronoun in that language is the last letter of the alphabet. The Russian word for I (я) is not only in the last position of the alphabet, it is also turned backward - facing the rest of the community of letters. It is suggested that a Russian-speaking culture has a propensity to socialism. [5]

Biblical languages have been studied from this perspective for almost as long as the perspective has been floated. Thorleif Boman wrote Hebrew Thought Compared with Greek in 1954 (originally in German). Observations include the fact that Hebrew is built on more concrete grounds and Greek is more abstract. An example might be the word love. In Hebrew, ahav (to love) is comprised of three siglae - aleph, hey, and beit. The aleph (leader) combines with the beit (house) to compose the word for father (leader of the house), and the intervening hey (open window) gives us the Hebraic meaning of love: anything that we do for another that opens a window to the Father for the receiver. The two Greek synonyms which are used to translate ahav in the Septuagint are agapao and phileo, neither having the kind of concrete undergirding that the Hebrew word has.

Benjamin Jowett, as early as 1826, remarked that when one approaches the reading of Scripture as though it were like any other book, he (or she) quickly finds that it is not at all like any other book, but rather is "a book of incomparable spiritual power." [6] We are to deduce from his observation that the Bible should not, in fact, be treated like any other book. The Torah is a product of a culture 3400+ years behind us in the timeline, and half a world away. There is a great hermeneutical value in understanding the effect of sociolinguistics on cultures and the populations which comprise them. Just as Hermann Gunkel and Martin Dibelius's concept of Sitz im Leben (situation in life) enlightens a text by drawing attention to the context of the passage, so also does the science of Sociolinguistics enlighten it - but by focusing on what the language tells us about the cultural background and foreground undergirding the passage. [7]

Dr. David A. Livermore has developed an entire philosophy of intercultural relations based, in part, on this science - Cultural Intelligence (CQ). In his several books on the subject, he delves into what he has classified as the four foci of CQ, one of which is "behavioral CQ." Behavioral CQ is the "action dimension of CQ," i.e. our "ability to act appropriately [verbally and nonverbally] in a range of cross-cultural situations." [8] Perhaps understanding the Hebraic sociolinguistic might assist us in reading the Torah through a lens more suited to it than the ones traditionally applied. As the course progresses, these ideas will become more fleshed out and your understanding of and approach to languages (both Biblical and non-Biblical) might take on a different nuance than previously.